Artists David Hartt and Tim Portlock transcribe their worlds, creating complex narratives that address global exchange, racial tension, and the physical and sociological effects of failed modernist projects. Man-made deterioration is juxtaposed with representations of sublime and persistent nature—creating images of startling elegance despite their crumbling subjects. Atmosphere and ideology frame fraught narratives of white flight, urban planning, and socioeconomic stratification—issues which have been endemic to social design since the nineteenth century, but which were exacerbated throughout the economic booms and busts of the mid-to-late-twentieth century. Picturing the banal landscape of industrial decline, both Hartt and Portlock reassert the distance from which most individuals will view these problems. In scenes at once devoid of human life and irreparably changed by human hands, these artists call attention to the cyclical entropy  of humanity on a global scale while also rendering beauty into these abandoned environments. Fallow Fate provides a valence through which we might view stasis as a point of recovery.

David Hartt’s work evokes a stark and wild reality through magnificent framing of ordinary urban and natural scapes, disrupted by the ruins of architectural and industrial feats. This selection—composed of images from several discrete series of photographs made in Detroit, Sakhalin Island, and Puerto Rico—speak to the unique dualities that emerge on the world stage; relationships forged through the cultivation of modernity across nations; and the uncanny ways in which human folly uncoils to reveal striking similarities despite cultural differences. For Hartt, the narrative of modernist inspiration and the ruins left in its wake is  perennial and entwined across borders.

The digital renderings created by Tim Portlock are more localized, drawing harsh attention to the crumbling factory-era fragments of cities like Philadelphia, Camden, and the hazy strip of Las Vegas. Portlock’s 3D-modeled manipulations, with their whimsical video game motifs and Hudson River School-inspired sunsets, denote a digital manifest destiny. Across cityscapes that have been meticulously photo-captured and stitched together, Portlock reveals glimpses into the obscured realities lurking behind gentrification and corporate development. These sparse aerials glow with an apocalyptic beauty that is not only stirring for residents of these locales, but characteristic of American industrial centers across the country.

Locks Gallery is pleased to present Hartt and Portlock’s work in conversation, prompting investigations between perceived expectations and far-reaching realities. We are challenged to confront the infrastructural issues at work  beneath the surface of grand design, to critically engage with space as a subject that is neither neutral nor unaffected by the plagues of contemporary society, while considering the implications of the land’s ability to restore its own vitality when humanity lies fallow. 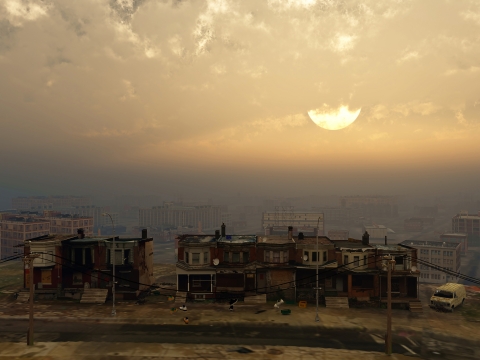